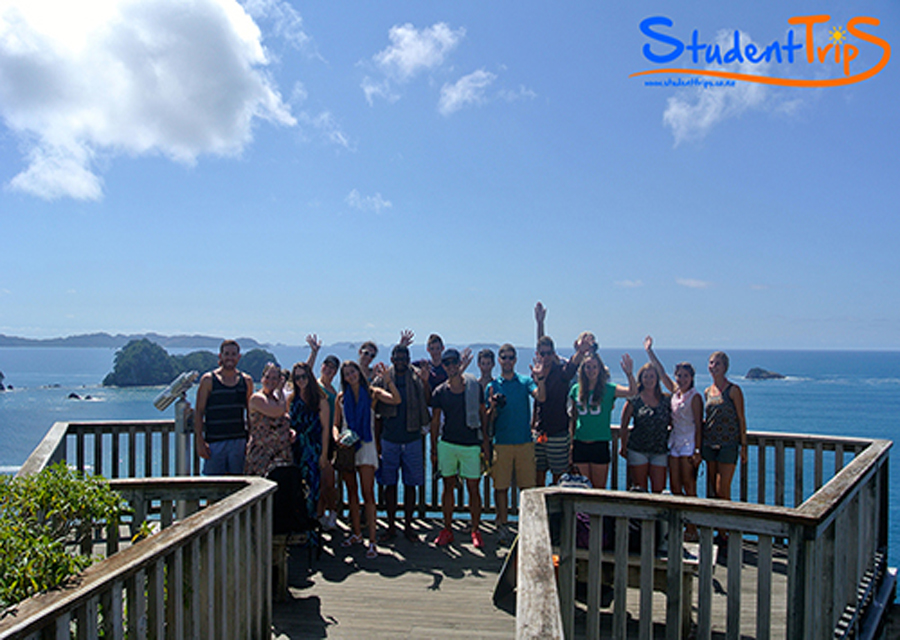 This weekend was the Coromandel weekend trip. On our first day we went to one of the best beaches here in New Zealand: Cathedral Cove beach. To get to the beach, we had to walk approximately 40 minutes. It was a bit of a walk, but it was amazing and the view out to sea and the surrounding islands was stunning. We had such a good weather and the sea looked bluer than blue. When we got down to the beach, The Cathedral Cove was wonderful! you would not expect it to be so big, but when you go into the cave, it is huge! The beach was great as well – white sand and the ocean was crystal clear. Everyone was lying on the beach with some beers and we had a lot of fun. The waves were massive because of the cyclone Pam. It was so fun to go into the water. A lot of girls lost almost their bikini’s! There was a rock in the sea, which you could climb up. Some people were to scared to go on the rock because of the waves but some people tried. Patrick was not careful enough; he slipped and has a few scratches on his arm now (poor him). 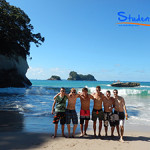 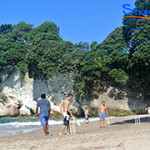 We went to the hot water beaches after the cathedral cove and started with an awesome BBQ with burgers, sausages and salad! It really was a moment to remember. Everyone was hanging out with each other, the food was good, we had some drinks and laughed a lot. Combined with good weather,  it made the evening complete. After dinner you could try to dig a hole to experience the hot water beaches. Unfortunately, it was high tide so it was difficult to dig a hole without the water coming up and destroying it. But you could go with your feet into the sand to feel how warm it was. For some people the sand was even too hot! Sometimes it really felt like you had burned your feet.

We ended the day with a good party! We went to a local pub where a live band was performing. A lot of things happened that night, and the next day a lot of people were hangover. We made a good breakfast with scrambled eggs to make the hangover a little bit better. Afterwards we went to the Cook Islands. There was a lot of wind because of cyclone Pam. Next we went to an old fashioned winery that was nearby. We tasted a few wines and a number of fruity spirits, most of them were delicious. It was an amazing weekend; we did a lot of things and had a lot of fun! You can find the photos here.