Wow, what a weekend! This trip was a trip full of thrills, adventure and we couldn’t have asked for better weather. Rotorua is the home of boiling mud pools and geysers – a beautiful place that is full of activities you really don’t want to miss out on. The first day we went white-water rafting. Some people got really nervous because of the seven-meter waterfall! It was scary but we had tons of fun! Also, some people went sledging instead of rafting. It was pretty intense thing to do… afterwards a few people had some sore muscles- But it was definitely worth it! Ryan found the whole thing a bit challenging, he kept sledging the wrong way over and over again. Poor him! Following the luge and rafting we made our way to the hostel. This is where the party got really started. Everyone came down to the hostel’s swimming pool and began to drink and listen to some music. We had many beers and pizza for dinner, which made everything complete. It turned out we were not the only one at the hostel. There was also a bachelor party going on! Who saw the big baby man jumping into the water with only a diaper? Afterwards we had a party at Rotorua’s famous “Lava Bar”. Shame on you people who were sent out of the bar! And too bad for the people who had their beers confiscated by the guard for drinking in the computer room! That aside, EVERYONE had a great time regardless! 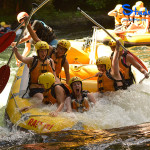 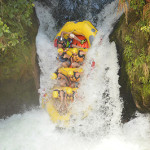 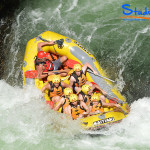 The next day started with a visit to a Maori village. While some people were understandably feeling a little bit hangover, it was an awesome day. Within the Maori village there are lot of geysers to be found… It was so cool to see everything. Here you had the chance to eat a typical Maori pie, which tasted great! Later that day, we saw a presentation of the Maori Culture. They were singing all kinds of songs and did the “Haka” dance, which was very special to see. It is so interesting (and strange!) how they use their eyes and tongues during it.

After the visit we went luging. That was so cool! Again, everyone looked really pretty with the helmets. Some girls thought they were going so fast, only to be passed by a little five years old boy! Some people went off the adventure track. There was one hill which saw almost everyone jump in the air! But not everyone was adventurous enough. Kyra and Nina went off the intermediate track. Were they too scared for the adventurous one?

If you think that this was everything, you are wrong! The last activity of the trip was Zorbing. For those who don’t know what zorbing is: With Zorbing you roll downhill inside a plastic water-filled orb. It was so fun to do. You could go with between 1 and 3 people in one orb. With the final orb everyone on our trip laid flat in a line, and Laura and Liesette (who were sitting in the orb) rolled across them. It was a pretty scary thing to do. While Liesette was okay, Laura was screaming like hell! Long story short; this weekend was amazing! We had a lot of fun, made new friends and did amazing activities! Do you want to see al the photos? Click here 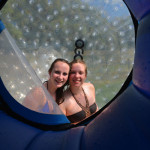 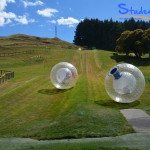 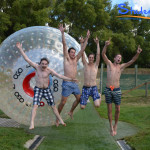 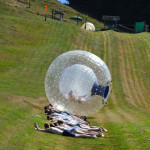