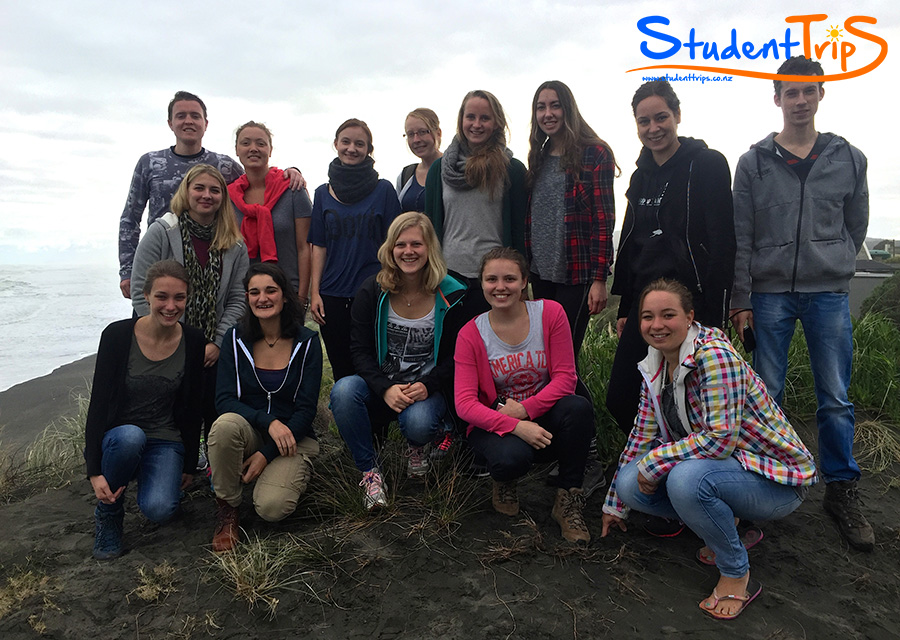 Saturday was a special day. We went to Waikato to see New-Zealand’s best-kept secret; the glowworm caves. We started the day with a stop at a beautiful black-sand beach. The sand on the beach was black as a result of the volcanic activity in the area and the view out to sea was amazing! The next thing planned was the glowworm caves. To get there we had to drive through a massive valley that by the looks of things very few tours had been before! We thought that the valley was never going to end. We took some great photos along the way and saw many sheep. At the end of the road was a house with a huge garden and was where the tour for the glow worm cave began. Everything about that house was organic. They had one big coffee machine were they made the coffee – and it was delicious. Truly the best coffee anyone had tasted! Also, all the food they offered was organic. They had the best cookies and who else loved the sandwich with salmon and cream cheese?! After lunch it was time to get ready to start spotting some glowworms! Some were a bit nervous, everyone had their own light and we all had no idea what was coming up. The first part was okay, we could walk normally enough…except for the fact we were knee deep in water! Then a tough part started – we had to crawl through the water on our hands and knees, which was extremely cold. It also didn’t help that someone spotted an eel earlier, and let’s not forget all the spiders that love to live in caves. We were soaking wet after the crawling part, but it was definitely worth it! We saw tons of glowworms, it was so cool to see them, especially when we turned our lights off. Everyone was holding hands and walking through the dark cave and the only light that would guide us was from the glowworms themselves.  It was so cool and weird that that was possible!

Our guide was really fun. He told us really good jokes about a woman he once did not like during the tour. He told her to crawl through a little “special” tunnel.  Turned out the tunnel was a dead end and she was all muddy by the end of the tunnel and had to turn around and go all the way back again! While Laurens thought the glowworms were really cool, he also liked the fishes and spiders. He had to give everything a name to make them his friends. I can tell, he made a lot of friends during caving! He will be busy if he has to add them all on Facebook! It was a really good day, but for most of us, the day was not over. A Dutch King Party was planned and many were going. We had an awesome night, everyone was wearing orange, there was a Dutch DJ that played both Dutch & English music and there was Dutch food. We all had tons of fun- Especially Melle, who was completely drunk and at one point even slept on a chair next to the bar… I’m wondering if he knows about that. The dutchies showed the non-dutchies how to party hard…awesome!