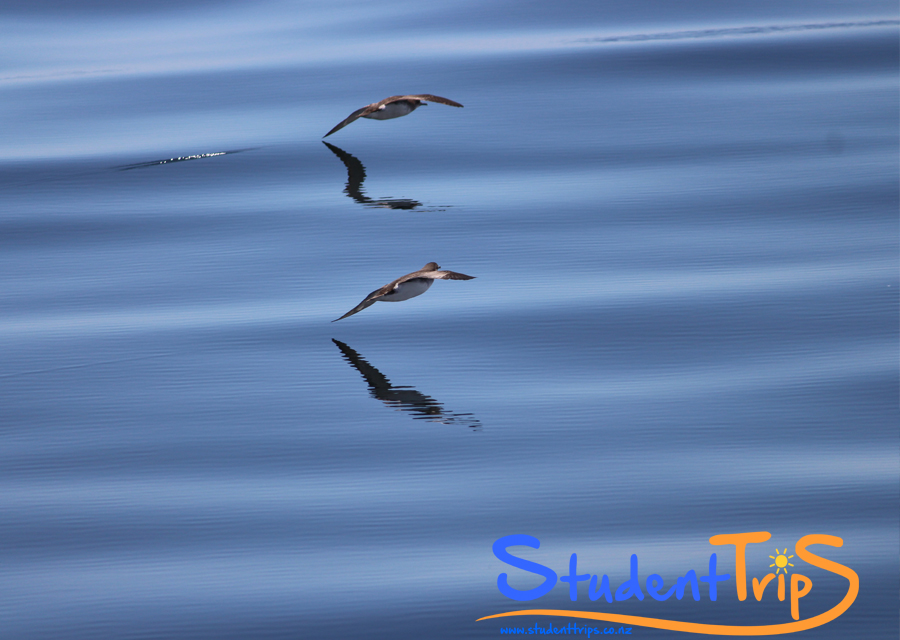 Day one: Rain has finally hit a Student Trips weekend tour. Shows that even the best tours can be hampered by weather. With spirits low the team were sure to impress with driver Garit and tour leader Haydon ensuring everyone were going to have a great time. Rain fell through the first stop at the Kauri park where we saw one of the biggest trees i have seen in my life. Stopping here was a good chance for a photo opportunity, a impromptu game of soccer in the car park and a short walk into a native NZ forest for those that wanted to join. Rain fell as we ventured over the Brenderwyn ranges and up towards Whangarei. Meaning cherished harbour we made a stop in the Whangarei township down by the town basin where we had the opportunity to explore the boats, and buy some lunch. Rain was still falling hard. Walking to the nearby waterfall was nice but again wet. One of the Student Trips squad even got in for a swim. The waterfall was beautiful and you could tell on a nice day it would be a magical location. This can be backed up by the fact that there was a wedding close by up on the grass. A very unfortunate day for it. Back in the bus we pushed on spirits were raised with some uprising music and the chance to dry off and warm up. With commentary of interesting history and cultural aspects of the area along with an awesome sound track we made it to the Bay of Island. The first point we came to on the road opened up and you could see the whole Bay. With ominous conditions, clouds lingered on the island tops and there was a lack of wind that suggested a stillness around this tranquil location, it was a magical sight. Driving down to the left of the bay towards Paihia i could tell that excitement levels were increasing in the nearing of our destination. Having arrived we had the night off to explore and take the sights and sounds in of the Bay and advantage of the free hot tub. Naturally this meant most of us hit the Bar for our free drink and BBQ however for those adventurous enough we also walked into town and experienced Kiwi culture at its best with a food and wine festival and concert of the Black Seeds a kiwi band playing in town. The party continued and it was apparent that people had fallen in love with the destination.

Day two: To follow on with the cultural aspect of the night the All Blacks semi final was also playing at 4am so it was an early start for many. A nail biting game saw the All Blacks come out on top. With a win under our belt and the sun now shining you could tell that it was going to be a great day! Breakfast and on the bus we were off on an adventure to the northern most point of New Zealand. Mangonui harbour was the first break where we could enjoy a coffee and wake up properly from our big night. Some enjoyed the Fish and Chips from arguably one of the best in the country. And we walked down the wharf and had a chat to locals about fishing. One guy was live baiting for his catch of the day a big John Dory and learnt about the amount of fish that are supplied to the NZ market through this port.  Next stop, the top stop was Cape Reinga and was were a lot of us were the closest to home without leaving the NZ mainland. A sign told us all how far away some major Cities were and reminded us that we were truly at the bottom of the South Pacific.  The lighthouse is still in operation and ensures ships do not pass through the perilous rocks and treacherous sea of where the two oceans collide. With a group photo and many other photos to boot it was time to leave. In Maori culture this site is said to be were all the Spirits pass through in reaching their mythical homeland Hawaikiki and is a very scared area. No eating and drinking is deemed appropriate here, so we took our lunch to a nearby beach (my personal favourite in the country) and we again played soccer, sunbathed and swam. With the day getting late it was time to leave back to Paihia for another BBQ free drink in the Bar and a soak in the hot tub. An extra intern also graced us with his presence and it was awesome to catch up with him. Anticipation was building or tomorrows activities.

Day three: Dolphins was the word of the day and everybody woke up excited and ready for an awesome day with an organised breakfast, sun shining and a quick walk down to the Wharf we all jumped on the our correct boats. It was the tour of a life time, even if we didn’t know it yet. Unfortunately the driver told us early in the day that the chance of seeing dolphins was slim so we had a tour of the Bay. We saw the ‘Black rocks’ and learnt about the formation of the area before heading out to the Hole in the Rock, a huge hole in which huge commercial boats can drive through. With the captain talking again this time we heard great news in that there was a pod of Orca whale in the Bay and we were going to be able to see them. In my opinion an Orca is worth 10 dolphins and watching this huge majestic creature was magical. With the pod playing around and putting on a show for the boat this was highlight of the trip in my opinion. We also saw a mirrored of other sea life all of which were amazing.  To finish the amazing weekend off after the cruise we went to see another waterfall for a quick photo opportunity before venturing home for dinner and a well deserved rest, it was New Zealand Labour day after all. The Bay of Islands weekend tour is easily the best trip Student Trips has to offer in my opinion. It’s safe to say we had heaps of fun and Yea, Nah – I’m Knackered!

To join an epic tour like this visit our webpage http://www.studenttrips.co.nz